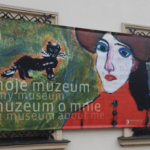 In Krakow, I met with an engaged and creative group of graduate students in Polish Studies who presented their proposed interventions for the Museum of Ethnography in Krakow. After touring the museum, we explored how a nineteenth-century institution could critically engage the complexity and fluidity of Polish identity. The students created an « interrogative museum » making excellent use of old displays and spaces. From there, we played with re-locating their interventions in venacular spaces, such markets that sell « ethnic » textiles and a countryside restaurant. I look forward to the catalogue that will be published to document this strong example of public scholarship. 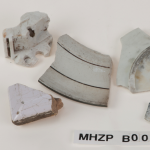 For this workshop, participants — an international group of museum professionals and researchers — chose one object or image that they find difficult to exhibit, whether for personal, institutional, disciplinary, or historical reasons. The workshop took place in the context of the conference, Museums and their Publics at Sites of Conflicted History, at the Museum of the History of Polish Jews. The workshop demonstrated deep engagement with sensitive materials that demand care and draw our attention to everyday acts of witnessing, as well to haunting absences. 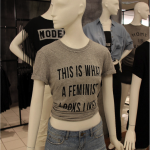 Though women have a long history of working (and volunteering) in museums, they’ve continually confronted issues of devalorization and invisibility, in institutions and their exhibitions. This workshop brought together a creative and determined group of women working in museums and adult education to explore cultural and institutional potential and limitations in taking up gender justice.   The Curatorial Dreaming workshop situated our discussions and creations in memorials and art galleries in Europe; museums in Canada engaged in decolonization;, and tourism and popular culture sites in the US.   The power of imaginative pedagogical interventions in problematic displays was vitally evident. (Victoria BC, Feb. 2017) 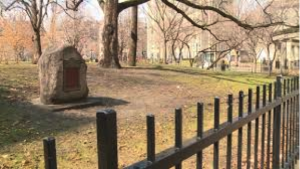 In March 2016, I conducted Curatorial Dreaming workshops with classes at Concordia University on “Postcolonial and Indigenous Theories and Methodologies for Art History in North America” and on  “Museums and Heritage in a Globalized World.”  Taught by Heather Igloliorte and Erica Lehrer respectively, the courses were linked through a Curriculum Innovation Fund project called Culture in the City: Digital Humanities for Democratic Dialogue.  In each class, students designed a curatorial intervention for an exhibition or heritage site in Montreal.  The Curatorial Dreams workshop helped students to develop their project in vivid terms, including understanding choices, goals, and predicaments that informed them.  The students also presented their projects at a pecha kucha style event.  The projects can be found here.

In October 2016, I did a Curatorial Dreaming workshop with students who were preparing texts for selected works in the Canadian Contemporary Art Database. The students were primed to take on the challenge of describing art in accessible and compelling terms for a broad and diffuse audience.   Each had chosen three artworks that evoke collective narratives, such as myths, religious stories, and fairy tales. Their assignment was to write an “exhibition essay” by putting the pieces in conversation with each other. In our workshop, students rose to the occasion of introducing me – an outsider—to their chosen works. They broadened my contemporary art horizons. I, in turn, engaged the students in a process of conceptual imagination that moved them beyond the assignment. Working collaboratively, they titled their exhibitions, and imagined them in specific spaces – a bar, the Sailors’ Church in the Old Port, a home, the Redpath Museum, the Mont Royal cemetery, a lingerie shop, a metro station housing commissioned artwork from Expo ’67. It was fascinating to see how the act of “placing” their work in real space helped students to discover and sharpen their curatorial arguments and intentions 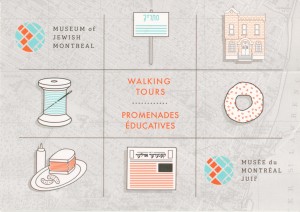 In July 2016, I returned to the Montreal Jewish Museum to work with a new group of interns and tour guides.  Keeping a project and the learning curve fresh for everyone is a good challenge.  This year’s experiment involved tasking groups to conceptualize tours by working with arbitrarily assigned constraints.  As a result, one group created a tour for children that would be provocative and challenging (within reason).  A second, created a tour for community workers and activists that reflected on existential and moral questions.  A third group created a fun and uplifting  tour and participatory event for the elderly.  We all saw how constraints can push creativity and exploration.  I’m pleased to see seeds of the workshop in the museum’s current programming, such as the BYOB (Bring your own bubbie) storytelling event, on now!

Translating Research into an Exhibition

In May 2016, I conducted a Curatorial Dream workshop with Stephanie Schwartz on her recently completed postdoctoral research on Moroccan Jews in Montreal.  Stephanie is an accomplished public scholar and this workshop was designed to help her research into a focused exhibition that  would contribute to her broad goal and related projects of challenging dominant conceptions  of Jews in Quebec.   Inspired by activism and spatial stories, Stephanie had already “mapped” the  1977 NFB documentary 20 Ans Après by Jacques Bensimon.   Building on this, we focused on three scenes of stunningly passionate conversations between Moroccan Jewish women, youth, and community organizers. Could these scenes become  conversation starters in a contemporary exhibition? What artifacts and music were the backdrops to these peoples’  lives?  Could crowd-sourcing teach us what happened to them over the next 30 years?  Could audiences continue the conversations in role-plays, including translating the scenes into other languages, and into present day immigration stories?   An image of an interactive micro-exhibition took shape.

In July 2015, I conducted a Curatorial Dream workshop with the Museum of Jewish Montreal. Wearing my ethnographer hat, I first participated in, and observed, two of the museum’s walking tours called “Making Their Mark” and “Rabbis, Writers and Radicals.”  Following this, I facilitated at two- part Curatorial Dream workshop with the staff and interns.

In part one, I reported back to the group on my experience of the walking tours. I offered positive feedback (fantastic depth of research, personal and collective passion, and so much more) as well as suggestions for future consideration, such as making curatorial choices visible and noting  how most sites on the tour are unmarked by the city.   I offered small, concrete ideas for making the process of exhibiton-making transparent, as this is, I believe, intrinsically compelling and enriching.

Part two of the Curatorial Dream workshop was a game, in which two teams prepared a new walking tour proposal for a fictional visiting philanthropist. The teams followed specific guidelines to prepare, present, and critique their projects. The outstanding results reflected a cohesive vision and participatory ethos amongst staff and interns.

A debriefing session led to broader reflections on the pedagogical goals of the museum in relation to establishment community organizations and museums, as well as musings about future experiments.

In January 2016, I worked with visiting students from the University of Virginia over a period of two days, as part of a “Museums in Quebec” Study Abroad Program, led by anthropologist Richard Handler.  Our days consisted for walking, talking, and looking – all to develop a narrative about cultural politics in Montreal, as revealed by both the built environment and its museums.

After spending time in the Old Port, Mile End, the Redpath Museum, and the Montreal Museum of Fine Arts, we held a debriefing session which incorporated the students’ found images, which they collected and submitted to me with that most versatile tool, the cell phone/ digital camera/ computer.  This Curatorial Dreaming exercise revealed the students’ critical engagement with the visual culture and experiences of colonialism, and their affective response to public murals, both political and poetic.  The Curatorial Dream exercise will be further developed and integrated into the course next year, hopefully in less frigid conditions.

In December 2015, I conducted a Curatorial Dream workshop for an experimental , interactive exhibition by Nadine Blumer, a postdoctoral researcher with the Department of History at Concordia University. Nadine researches the Roma genocide and she was designing a  virtual game to lead people through what she calls the “lifecycle of a monument.” This will be part of “Moving Memory,” an exhibition which Nadine is developing in collaboration with artist/ researchers Hourig Attarian and Anique Vered ,to bring alive experiences of memory politics and victim competition.

In our one-on–one session, we clarified a unifying theme for the group exhibition, identified a resonant core image for the game, planned its structural and narrative logic, considered its spatial and aesthetic dimensions, discussed  audience needs and how to incorporate research and evaluation into the project, and concretely visualized next steps. My role was both interlocutor and sounding board.  Update:  As her project developed, Nadine’s creation became increasingly physical (felt), and the plan for a virtual game receded (see here for her critical reflections on the promise of virtual games as a tool for empathy).  “Moving Memory” was presented at the Association for Critical Heritage Studies Conference at Concordia University in June 2016.